Includes 19% VAT
plus shipping
Delivery Time: about 3 to 5 working days

With the Acro Crossover CR-2 Thinning 225
transitions become child’s play.
You want to create a look that looks
like it was not freshly cut, with no visible
edges? Then this model is your right choice.

A new wave of hair design is happening all over the world that crosses over barbers and hairdressers.
The cross-over style that interweaves the various hair designs is becoming the mainstream in the United States and we have quickly imported and incorporated this style. Whitney VerMeer, an educator who is active worldwide, has joined as a member in our research development this time and the “ACRO CROSSOVER” was completed.

Thinning of “ACRO CROSSOVER” shows up as which mixes barbering and hairdressing. In the men’s cut, which frequently opens and closes and easily accumulates fatigue, the sense of stability is increased and better handleability. Prevention of distrix with a sharp blade made of nano-powder metal, and improved thinness by using a thin blade.

Whitney VerMeer “I love the usability of it! I am currently using the scissor to blend through the transition area and to take out and lines. It is also great to soften to perimeter for a more “lived in” look. This is great for anyone growing out their hair or someone who doesn’t want to look like they have a fresh haircut. I do like the weight and thinness of it as well!” 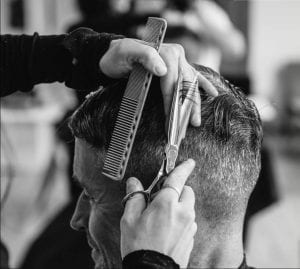 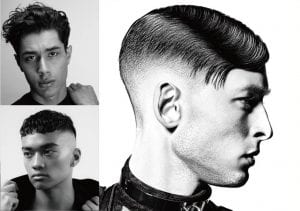 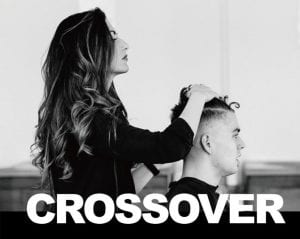 The ｢ACRO CROSSOVER THINNING USUBA｣ is the first scissors line developed and designed. Crafted for the ultimate creative freedom, this is the definitive artists tool.

The CROSSOVER 225 Thinning CR-2 in Numbers:

Whitney VerMeer is an American hair make up artist with global awards winning. She is the first female barber won the NAHA MEN’S HAIRSTYLIST OF THE YEAR in 2017. Her craft of conceptually and architecturally inspired hair designs and notorious for her integrity to her core-beliefs of equality in the industry she moves to disrupt. Proceeding her arrival into the industry, Whitney studied cosmetology prior to her barber apprenticeship which lent traditional technique to add to her unique and ever evolving skillset. She has designed and deployed advanced barbering global with MIZUTANI SCISSORS.

NANO POWDER METAL USUBA
Our Nano Powder Metal®, made with the new HIP manufacturing method (Hot Isostatic Pressing), is steel fabricated from a fine powder at the nano level. The uniform-grained powder is hardened with high temperature and pressure tempering, essentially eliminating all filler and impurities, and this method is used in precision manufacturing items like Blu-ray disc molds, where high levels of purity are required. At MIZUTANI, in order to create the ideal hair-cutting scissors, we have conducted our own proprietary research with this material, and created scissors with blades that combine strength with a long cutting life and the ultimate sharpness.

BALL BEARING
These metal ball bearings are small, high precision items produced by a Japanese manufacturer. With superior anti-rust properties compared to foreign-made products, they have a high level of durability. By drastically reducing friction around the screws, they not only ensure smooth opening and closing of the scissors, lessening burdens on the hands, but also protect the edge from damage, contributing to long cutting life.

DISK DRIVER
Compact and easy to turn, this is a flat type driver for UFO screws. This screwdriver is included with all scissors with the mark shown.